When you think of dinosaurs, do you still imagine giant gray scaly beasts that went extinct? Get ready to have your mind blown. 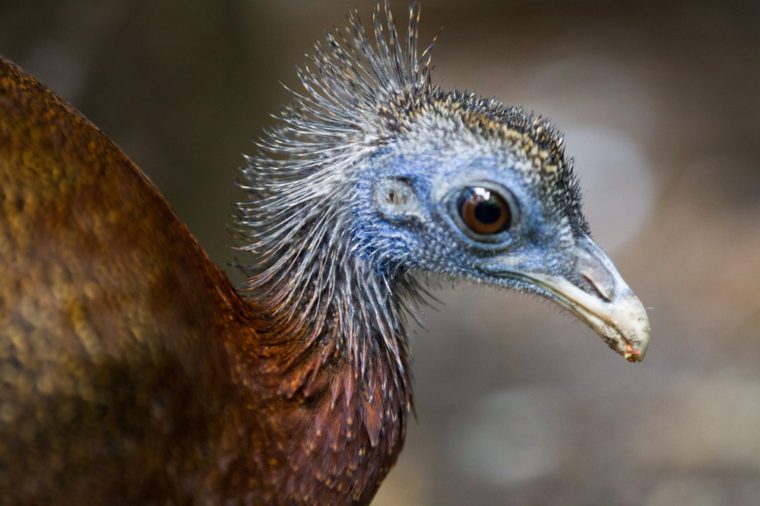 There was definitely a mass extinction event 65 million years ago (probably related to a giant asteroid that smashed into Mexico’s Yucatán Peninsula), and it did spell the end for most dinosaur species. But not all. “Today’s birds evolved from dinosaurs, which makes them every bit as much of a dinosaur as T. rex or Triceratops,” says paleontologist Steve Brusatte, author of the book, The Rise and Fall of the Dinosaurs. “A good analogy is bats. Bats are a weird type of mammal that developed wings and the ability to fly. Birds are a weird type of dinosaur that did the same thing.”

Daniel Barta, a PhD candidate at the American Museum of Natural History’s Richard Gilder Graduate School, adds that there are more species of birds alive today (at least 10,000) than any other group of land-living animals with backbones. “Dinosaurs are alive and well today in the form of their bird descendants,” he says. 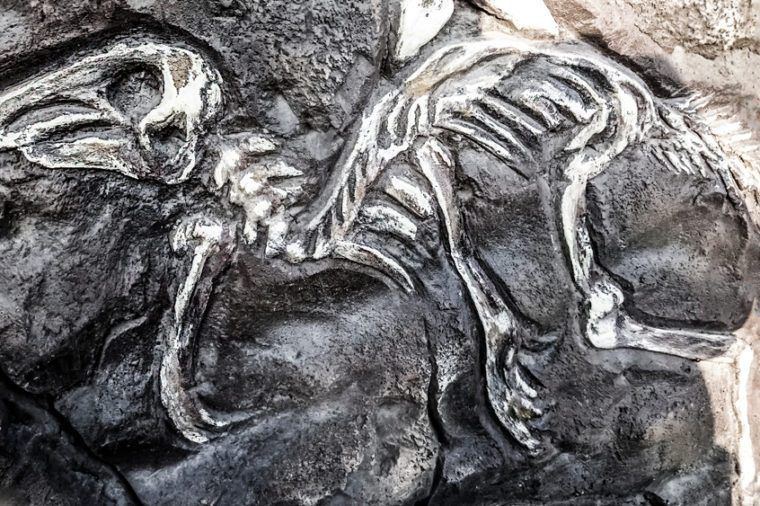 Not necessarily. “There are thousands of fossils of feather-covered dinosaurs that have been found in China over the last two decades,” Brusatte says. In fact, fossils show that a cousin of the T. rex called Yutyrannus was covered in downy fluff (which probably didn’t make it less scary to its prey). Feathers would have helped dinosaurs regulate their body temperature, so they would have been particularly helpful to smaller animals such as Velociraptors. Even the biggest plant-eaters might have had a little fuzz, like the tufts of hair on elephants. 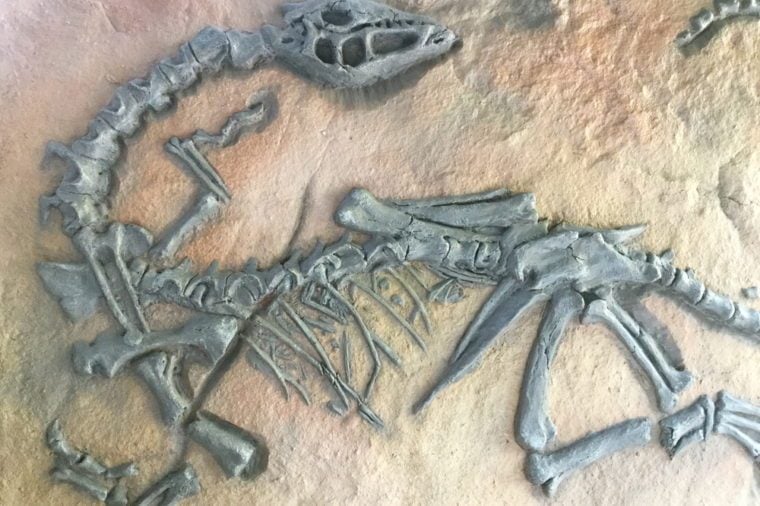 Scientists can tell from looking at the microscopic structure of dinosaur bones that they grew rapidly, and only animals like birds and mammals, with fast metabolisms and well-regulated body temperatures, do that. It explains why dinosaurs evolved to have feathers for insulation, but it’s still not totally clear whether their body temperatures worked exactly like ours do. “There are a lot of different ways to be ‘warm-blooded,’” says Barta. “It is probable that dinosaurs were not exactly like birds or mammals in terms of their metabolism.” Check out more interesting animal distinctions you forgot all about.

Myth: They were all grayish-green 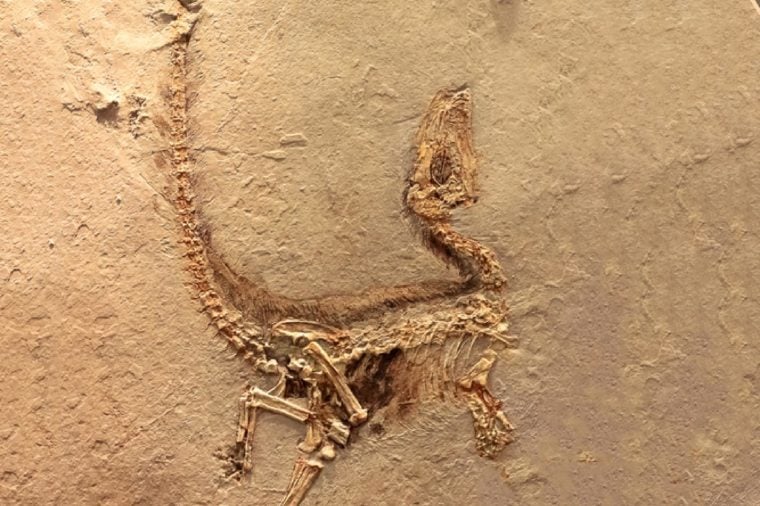 Dinosaurs were actually quite colorful. Amazingly, paleontologists can tell what colors some of them were because they’ve found really well-preserved fossilized feathers containing structures called melanosomes. These held pigments, and their different shapes and arrangements indicate what colors they were. “It’s one of the most amazing things that’s happened in my lifetime as a scientist,” Brusatte says. For example, a small carnivorous dinosaur in northeastern China called a Sinosauropteryx probably had a striped brown tail and a raccoon-like bandit mask.

Myth: They were all giant 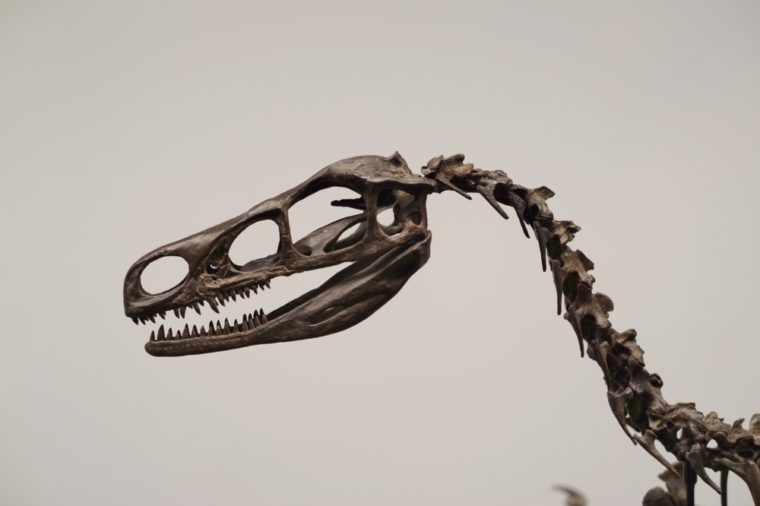 The skeletons of the biggest dinosaurs were, of course, the first ones that caught the attention of fossil-hunters. But now that paleontologists know what they’re looking for, they’re finding dinosaurs of all sizes and shapes. Long-necked sauropods like the Dreadnoughtus schrani could be as big as passenger airplanes. “But many dinosaurs were tiny,” Brusatte says. “Some were only the size of pigeons.”

Myth: We’ve found fossils from most of the dinosaur species 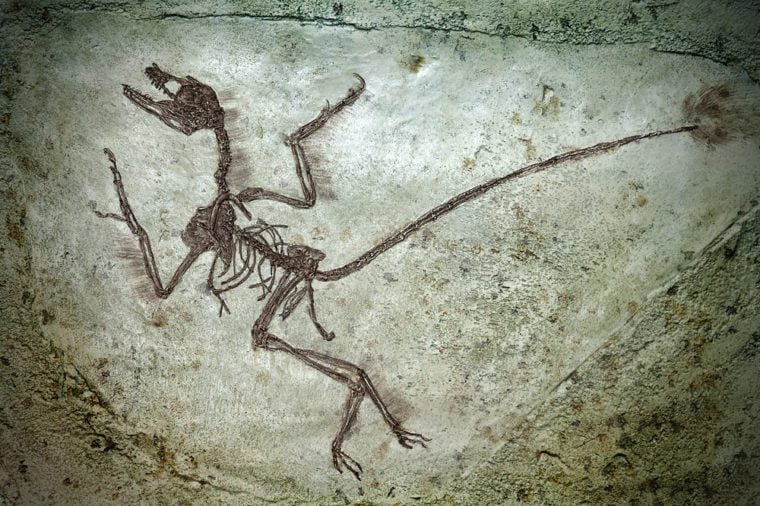 Researchers have identified more than 700 species of extinct dinosaurs, but that’s probably a drop in the bucket—we know of about 10,000 species of modern avian dinosaurs, or birds. Fossils are being discovered at a rapid pace, with a new dinosaur species being identified every week, on average. That’s partly because paleontologists are being trained all over the world, Brusatte says, and they’re finding fossils in their countries. “Particularly younger people—women and men—in countries like China, Argentina, and Brazil. These enormous countries are developing quickly, opening up to the world, training their own scientists in new universities and museums.” Take a look at these photos of gorgeous modern avian dinosaurs (birds). 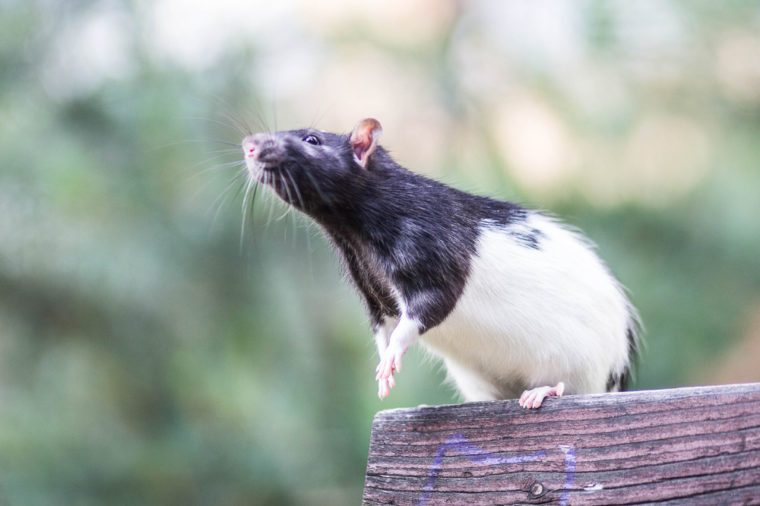 Mammals evolved from a reptile called the cynodont, which looked like a scaly rat and lived more than 200 million years ago, before dinosaurs. Mammals had diversified into marsupial and placental lines of evolution by about 165 million years ago, during the Jurassic period when dinosaurs were having their heyday. “There was never a mammal (that we know of) larger than a badger that lived with the dinosaurs,” Brusatte says. “But almost as soon as the non-bird dinosaurs went extinct, mammals started to diversify and spread around the world and grow to much bigger sizes.”

Myth: All big reptiles were dinosaurs 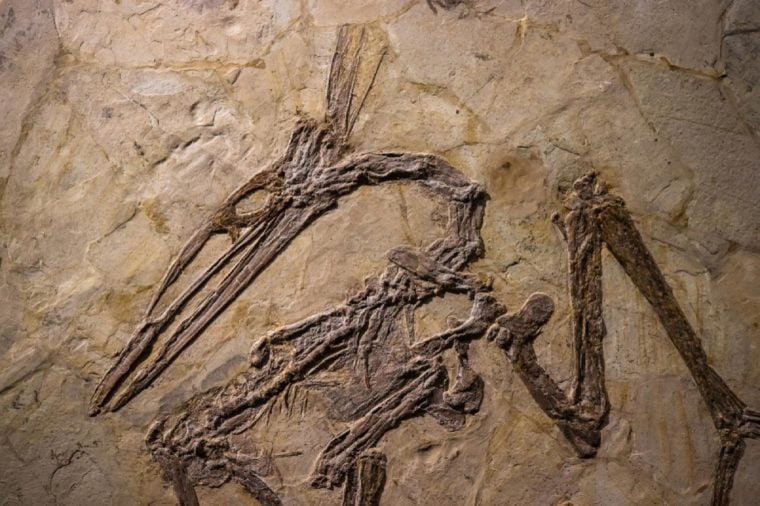 Flying reptiles like pterosaurs (which included pterodactyls) and marine reptiles like plesiosaurs and ichthyosaurs were not dinosaurs, though they lived during the same time period and suffered the same fate during the mass extinction 65 million years ago. They often get lumped in with dinosaurs, though they belong in their own separate categories. But Brusatte says, “There were indeed some flying dinosaurs: birds!” 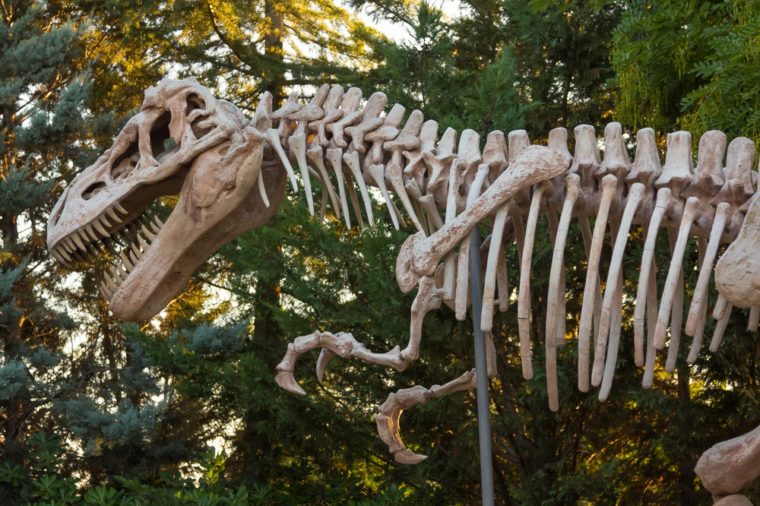 “Some dinosaurs were fast, like the raptor dinosaurs, and some were slow, like the big long-necked dinosaurs,” ” Brusatte says. A recent study showed that Tyrannosaurus probably didn’t go much faster than jogging human, based on the stress running would have put on its massive foot bones. 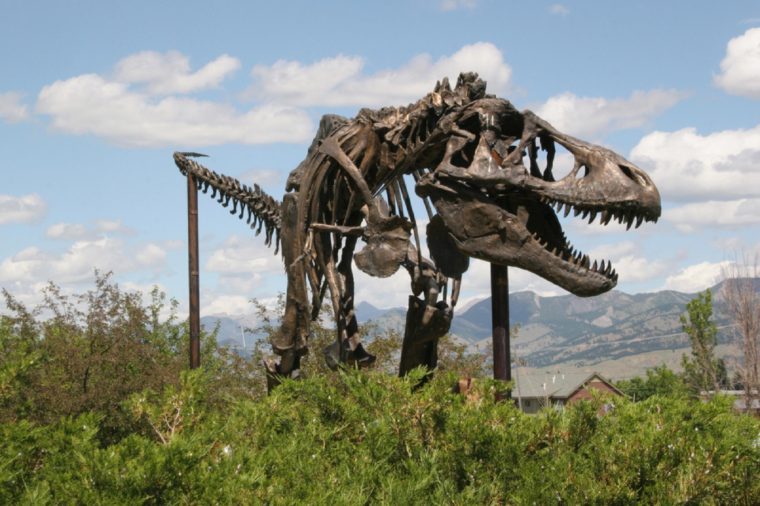 No, no, no—museums originally built many T. rex skeleton models in an upright position with their tails on the ground, but researchers have known since the 1960s that they actually must have held their bodies horizontally, like a giant teeter-totter. Somehow, the message doesn’t seem to be getting through to the public: When a Cornell paleontologist asked students to draw a picture of a Tyrannosaurus, most drew it upright. “I think popular culture usually takes a long time to catch up to current scientific thinking,” Barta says. “Even when updated images do arrive, the outdated images still persist and spread alongside the newer ones.” Here are 23 more “facts” about animals you have all wrong.

Get articles sent right to your inbox
Enjoy the BEST stories, advice & jokes!

NOT a myth: Tyrannosaurus was a fearsome hunter 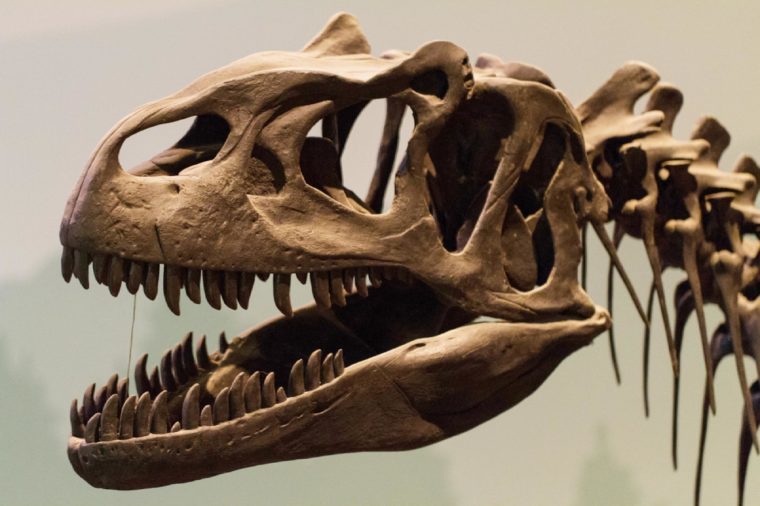 A popular theory in the 1990s held that T. rex wasn’t as tough as we’d long thought—that instead, it was basically a giant scavenger, roaming around eating carcasses that other predators had brought down. That theory was wrong: “Evolution doesn’t produce a bus-sized animal with a bathtub-sized head and 50-some railroad spike teeth that can crush bone just so that animal can walk around picking up dead carcasses,” Brusatte says. Tyrannosaurusprobably wouldn’t have turned down a free meal if it came upon a fresh carcass, but it was definitely capable of killing a live prey animal. Researchers have found Triceratops bones with Tyrannosaurus bite marks that had healed up, meaning that the two species definitely tangled (and that Triceratops occasionally made it out alive).

Myth: Tyrannosaurus would have hunted Stegosaurus 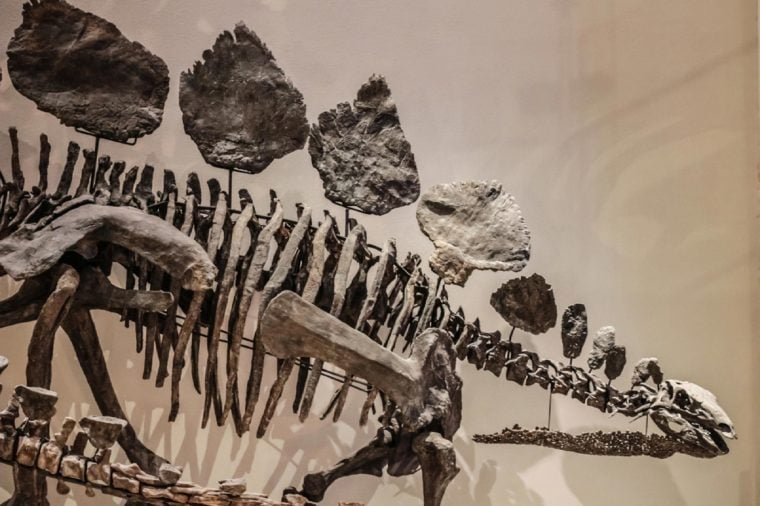 Myth: They were evolutionary failures 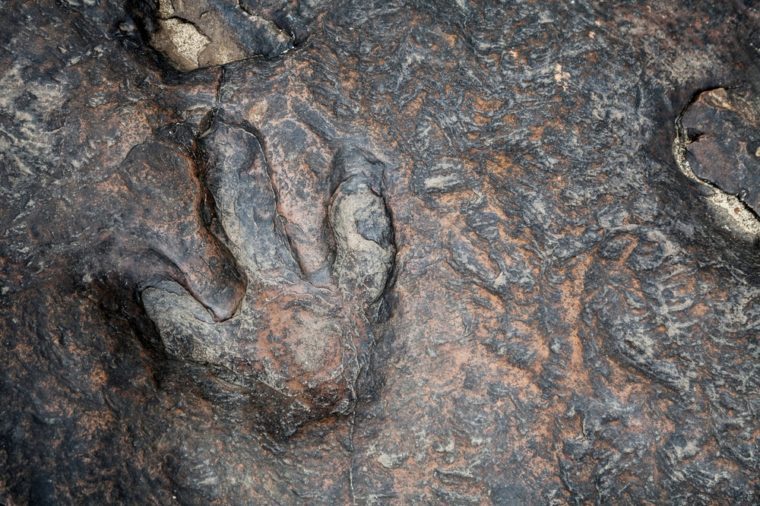 “I hate this stereotype that dinosaurs were evolutionary failures, that they were dim-witted, slow-moving, uninteresting animals that just sat around waiting to go extinct,” Brusatte says. “They were an empire that ruled the world for over 150 million years!” To put it in perspective, our own species, Homo sapiens, has only existed for about 200,000 years so far; our first ancestors only appeared 7 million years ago. And don’t forget: If you listen at a window, you’re likely to hear the call of a modern avian dinosaur in your own backyard.