On June 11, 1993, Steven Spielberg’s summer blockbuster Jurassic Park opened, enthralling and terrifying moviegoers around the world. But how scientifically accurate was the film in bringing long-extinct creatures such as the T. rex, Brachiosaurus and Triceratops to life onscreen?

Part monster movie, part cautionary tale about biotechnology run amok, the movie reflected a watershed moment in visual effects, especially in the use of groundbreaking CGI, or computer-generated imagery. But Jurassic Park, based on the bestselling Michael Crichton novel of the same name, also benefited from credible science and considerable paleontological expertise.

Jack Horner was the movie’s resident dinosaur expert and consultant, and for good reason—he was one of a handful of real-life paleontologists whose work had inspired some of the ideas in Crichton’s novel. Now the regents professor of paleontology at Montana State University and curator of paleontology at the Museum of the Rockies, he gained prominence after discovering a new dinosaur species, Maiasaura peeblesorum, and publishing groundbreaking research about how dinosaurs nest in colonies and care for their young.

The character of Alan Grant, the intrepid fossil hunter played by Sam Neill in the movie, was modeled after Horner. The dinosaur dig site and paleontological camp—down to the vehicles and trailers used by experts—were inspired by Horner’s. Even Grant’s denim shirt-and-neckerchief look was based on what you might find in Horner’s closet. “That’s basically what I wear,” says the paleontologist with a laugh.

As Horner tells it, his major contribution to the movie was “to sit with Spielberg, go through the script and answer questions about dinosaurs.” In the end, Jurassic Parkwas a blend of scientific fact and movie fantasy, but Horner—who continued to consult on the franchise, including 2015’s Jurassic World—is a reliable guide to distinguishing between the two. 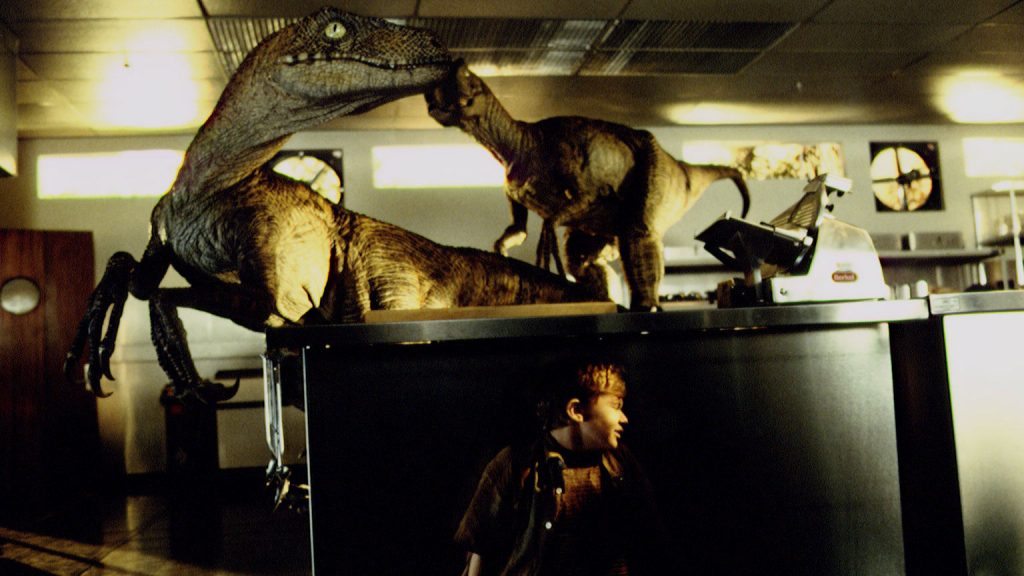 One key moment where Horner’s scientific reasoning prevailed was the scene in which the Velociraptors terrorize the children in a kitchen. Animatics were created of the dinosaurs sinisterly flicking long, forked tongues, like snakes or lizards. Horner strongly opposed the idea. “I said, absolutely not, that’s just not possible. We know for sure that dinosaurs didn’t have forked tongues, because they didn’t have Jacobson’s organs, like snakes and lizards, that stick their tongues up.” Spielberg took that out.

Instead, as a way of injecting the scene with the menace the director sought, a Raptor raises its snout and snorts, fogging up the window of the kitchen door, indicating the creature is warm-blooded like a bird, rather than cold-blooded like a reptile.

The film drew heavily on Horner’s research into the social behavior of dinosaurs. “My studies were of dinosaur eggs and showing that dinosaurs were social creatures. That they nested in groups and brought food to their babies and traveled in giant herds once they were finished nesting.” Horner particularly approves of the moment when Alan Grant observes, with wonder, “They do move in herds.” Says Horner: “That’s something I would have said.”

Horner also gave advice on the appearance of the younger dinosaurs, an area of personal interest to him since the 1970s.  “I really pushed for the neoteny—that the young animals needed to look the part…to be kind of cute-looking, with shorter snouts.” 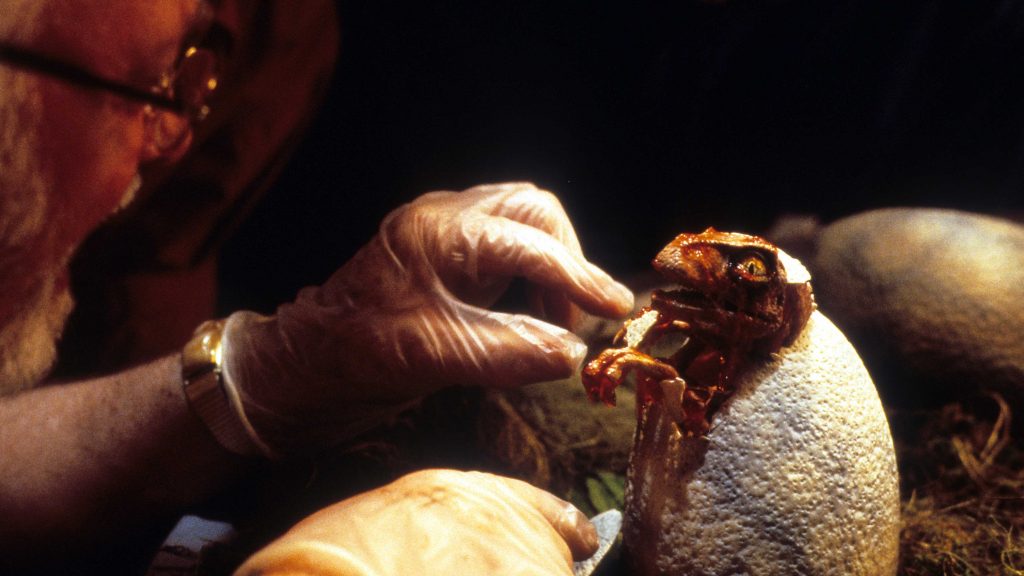 A baby dinosaur hatching from an egg in a scene from Jurassic Park, 1993. The film’s consulting paleontologist was the scientist who discovered that dinosaurs nest in groups. (Credit: Universal Pictures/Getty Images)

Some of the most memorable animal behaviors in Jurassic Park were actually contributed by the film’s dinosaur supervisor, Phil Tippett, a visual-effects veteran and something of a self-educated dinosaur expert. “Steven’s edict was that he wanted them to play as animals, not as movie monsters,” says Tippett, who was originally brought on to design stop-motion effects for the film, until those techniques were supplanted by CGI.

It was Tippett’s idea, for example, that the T.rex should attack an overturned Jeep in the manner of a lion tearing apart the belly of its prey. Tippett also overruled an early idea that the T.rex would pick up a vehicle in its jaws. “That would have worked for Godzilla, but not a real animal.”

At the heart of Jurassic Park is the idea that scientists are able to extract dinosaur DNA from mosquitoes trapped in amber since prehistoric times. Real-world attempts by scientists to do exactly that were common at the time, but unfruitful.

In the very year of the film’s release, Horner and his then-doctoral student Mary Schweitzer were engaged in a similar experiment, to extract dinosaur DNA from a T.rex fossil rather than a preserved mosquito. (Schweitzer has continued her research in the area.) “There is definitely some suggestion that there is DNA present,” says Horner. “Mary has found proteins and all kinds of biomolecules but, as of yet, has not found DNA.” 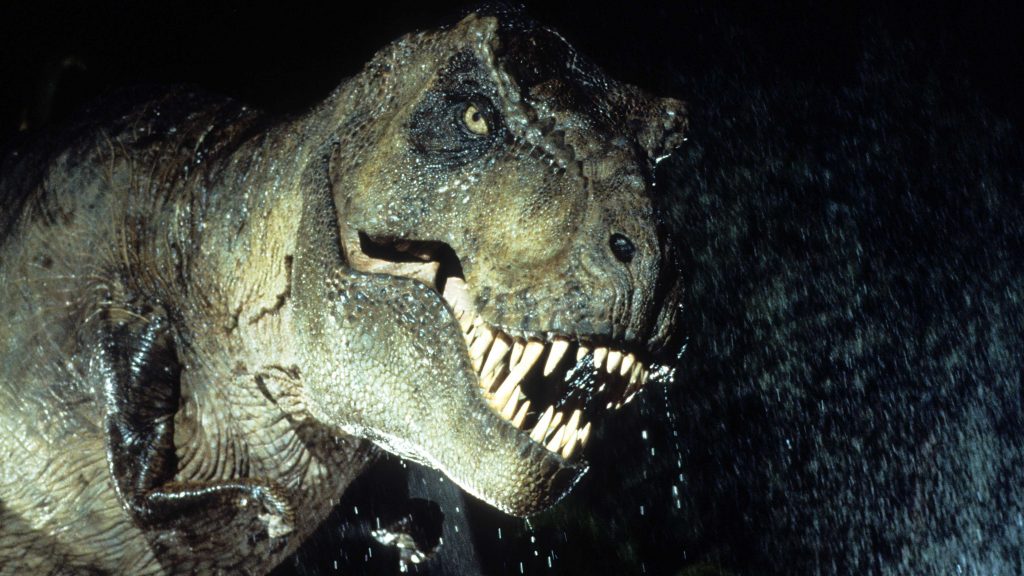 A T. rex in a scene from the film Jurassic Park, 1993. (Credit: Universal Pictures/Getty Images)

Some dinosaurs were missing their feathers

But Jurassic Park strayed from the science in some essential ways, starting with the gray, distinctly reptilian look of the dinosaur cast. “We knew at that time that dinosaurs were colorful, and at least some of them, including the Raptors, were feathered,” he says. As Horner explains, many dinosaur fossils have been discovered with feather impressions intact. Chemical tests have also been performed on Velociraptor fossils in Mongolia, indicating the existence of feathers.

Jurassic Park’s sound designer, Gary Rydstrom, created the movie’s dinosaur sounds by manipulating ones from the animal kingdom: The mournful wail of the Brachiosaurs was actually a donkey bray slowed down, while the roar of the T.rex was achieved by slowing down the trumpeting sound of a baby elephant. For his part, Horner theorizes that dinosaur sounds more closely resembled lower-pitched bird sounds than the “scary” sounds for which Jurassic Park opted. 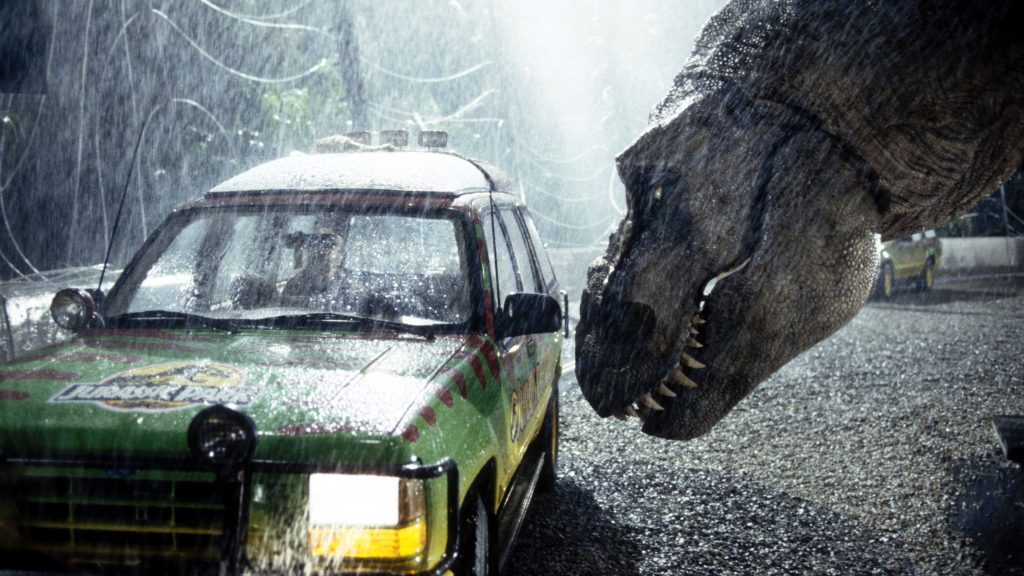 A Tyrannosaurus rex approaching trapped people in a car in a scene from Jurassic Park. (Credit: Murray Close/Sygma/Getty Images)

But perhaps the boldest piece of dramatic license taken in the film: the fast-running T. rex.

In an early scene, the film’s deluded dino-park founder, John Hammond, blithely tells his guests, “We clocked the T. rex at 32 miles an hour.” Later, when all hell has broken loose, the T. rex nearly catches up with an accelerating Jeep.

There’s no way the dinosaur could have run that fast, says Horner, who has also argued that the T.rex was more of an opportunistic scavenger than a predator.

“Animals that are two-legged and run fast, like ostriches, have a long tibia compared to a short femur,” Horner says. “But if you look at the femur and the tibia of the T.rex, the femur’s a little bit longer than the tibia. Human leg proportions are similar to a T.rex, and we don’t run that fast. We have a hard time catching a chicken.”

Recent studies, he added, have shown they probably couldn’t run at all: “At most they could get into a fast walk.”

Again, Spielberg’s cinematic vision took precedence over the science, with the director telling Horner, “He’s my actor. He can run as fast as I want.”

To this day, Horner receives messages from dinosaur-obsessed children lamenting scientific inaccuracies in the Jurassic films. “I try to explain to them that it’s fiction,” says Horner. “Steven Spielberg is the guy that gets to decide.”